16TH ANNUAL SAN FRANCISCO SILENT FILM FESTIVAL.I haven’t been able to document just how many years I’ve been attending the San Francisco Silent Film Festival, probably about 12 years….and it keeps getting better. Well the films keep getting better. There are about 14,000 tickets sold each year, with most of us going to most or all of the more than 18 events/screenings. This year had some fine examples of early Hollywood hits such as Lon Chaney in “He who gets Slapped” co-starring Norma Shearer and John Gilbert. There was a very early Douglas Fairbanks in “Mr. Fix-it”, and a surprisingly sexual pre “Blue Angel” appearance by Marlene Dietrich.

For me the real excitement came from seeing, for the first time, Yasujiro Ozu’s “I Was Born, but…” a 1932 masterpiece (and silent too). Clarence Brown’s 1925 deeply affecting”The Goose Woman” with Jack Pickford and Louise Dresser. At least three quarters of us were crying through most of this tear-jerker, and loving it. Two triumphs of the silent screen I’d never seen were the Russian 1931 classic “The Nail In The Boot” directed by Mikhail Kalatozov who also directed “The Cranes Are Flying” and “I Am Cuba”. The Boot Nail film is right up there with Alexander Nevsky and Battleship Potemkin. Then there was “The Great White Silence” a 1924 documentary of British Captain Robert Scott’s failed expedition to the South Pole. Seeing Antarctica almost 100 years ago was a surprise, and learning so much in one viewing was the surprise of the weekend. I’ll keep weaving Film Festival reporting in future columns, but you should definitely plan on going next year.

ANCHOR IN ANTARCTICA.( COMING ATTRACTION) As some variety of luck would have it Micaela Neus sat next to me at the Silent Film Fest starting with “The Great White Silence” and during most of the rest of the Fest. Micaela Neus lives and works in Antarctica!!! She is a mechanic, hails from Truckee, and her job is to keep machines running to support the scientists who are there. She’s working on a project called Open Antarctica, and is going to be writing exclusive reports weekly for BrattonOnline. Micaela completely changed everything I thought I knew about Antarctica in those few minutes between Festival films.

Who owns Antarctica? Which penguins are the meanest? How come all field and sign poles are bamboo? How do you get to Antarctica? Are drugs and alcohol big problems there? Is it true compasses just spin any-which way down there? What about human relationships when you live in a group of just 40-50 people? You don’t refer to years, or winters or summers there, as we do here. Global warming a hot topic in Antarctica? Did you know there was a murder in the Russian community a while back? Micaela has been going back to her job for four tours now. That means she leaves again in September and stays until April. She’ll be writing weekly, we’ll probably call her column Anchor in Antarctica or News-Knowledge-and Nature, something like that. She’ll answer all your questions, write to her here (bratton@Cruzio.com) and aside from all she’s learned in those four seasons there, Micaela just turned 30 last Saturday. Happy Birthday again Micaela and welcome to BrattonOnline.

ANTARCTICA…ACCORDING TO WIKIPEDIA.Antarctica, on average, is the coldest, driest, and windiest continent, and has the highest average elevation of all the continents.[5] Antarctica is considered a desert, with annual precipitation of only 200 mm (8 inches) along the coast and far less inland.[6] The temperature in Antarctica can reach -89 degrees Celsius (-129 degrees Fahrenheit). There are no permanent human residents, but anywhere from 1,000 to 5,000 people reside throughout the year at the research stations scattered across the continent. Only cold-adapted organisms survive there, including many types of algae, animals (for example mites, nematodes, penguins, seals and tardigrades), bacteria, fungi, plants, and protista. Vegetation, where it occurs is tundra.

WHAT’D I MISS??? Damnation, I’m gone for only four days and I see this piece about The Santa Cruz Chamber of Commerce and Lighthouse Point and Wingspread being topics involving future development?? I see that Jondi Gumz didn’t attach any specific Chamber names to those development ideas. Then I keep hearing about a proposed Riverside Street Sign welcoming folks to the Boardwalk and adding the number of existing parking spaces left on Canfield Island? One would assume that the Boardwalk would pay for such an ugly idea BUT only if the citizens would allow such poor taste.We know that our Mayor Coonerty and The Boardwalk PR Flack guy Chris Reyes are the best of buddies and that Charlie Canfield has never had and never again will have such a supportive City Council but isn’t this getting near the furthest the council will bend and for what??? We all know that this stupid Riverside Street sign won’t add one more tourist doing any more shopping downtown or cause one more tourist to stay overnight in this little town. Once again I gotta say be honest where would you or your tourist friends rather stay or shop… here or Monterey/Carmel?

The most out-of-touch organization in Santa Cruz County

This has to be the Santa Cruz Chamber of Commerce. According to Saturday’s Sentinel, this group, “a mix of government staff, elected officials, and people working in the private sector met to discuss how to increase jobs and personal income”. Gary Patton, on Facebook, describes their ideas as something like crabgrass, when you think its dead it just keeps coming back.

For example, some of the Chamber’s ideas point out a lack of awareness of what has gone here in the past 30 or so years. How about building a hotel on Lighthouse Field, a “Google Research Park” on the “Wingspread property”, never once taking into consideration that Lighthouse Field is bought and paid for as open space, and “Wingspread” property ceased to exist when it’s owner went bankrupt over 20 years ago and is now part of New Brighton Beach State Park. A Chamber recommendation wouldn’t be complete without a recommendation to fast-track Highway 1 widening, a measure that was defeated county-wide by a 2-1 margin in 2004. A classic quote from county development manager David Dobson: “We have to do something if we’re going to compete with Texas, where I used to work.” At least the county has handled this guy properly; he and his assistant were pink-slipped due to budget woes. For those who missed this Sentinel article, read the whole incredible thing here. You’ll even see a few good ideas were kicked around at their meeting”.

IN ‘N OUT BURGER. New-Canadian Dan Dickmeyer keeps Canadian taste alive by writing, “But I love In and Out. One of the first places I hit when traveling. They make their own fresh cut fries from potatoes, believe they make their own patties (don’t know the quality of meat), are super friendly compared to other places, milk shakes seem healthy and they have a limited menu without all the gimmicks. i.e. triple south of the border, Tuscan double jalapeño cheese burger, etc. The kitchen is out in the open so you can see what’s going on. They used to give you a little Christian prayer with every meal but no more. Don’t like the Drive Through window though. And they are pretty cheap. Have you been to one? I think the corner of Ocean and Water would be the perfect location. Or Fulford Harbor village where I live”. Gee, thanks Dan

PATTON’S PROGRAM. Gary talks about Marina and The Coastal Water project. He syas that the Whispering Oaks project is more aptly titled Dying Trees. Capitola is working on their General Plan and that means changes to 41st avenue…get involved. Then he talks about Santa Cruz’s Ocean Street plan and how that is developing.

VINTAGE DE CINZO.Motorcylists…it’s a problem in breeding. Check out this week’s sling and arrow.

LANDAU’S L.A. PRESENTATION. Saul Landau has a special showing of his film , »Will the Real Terrorist please stand up?” in L.A. Saturday July 26. Read the details

The visitors stand outside in a naked passageway between grey concrete bunkers and enough barbed wire to seal some national borders. The scorching desert sun alerts us to the surroundings and the contrast between what the prison architect has done and the landscape on which the immense concrete bunkers got built: brooding mountains, desert, cactus, and unseen bones of dead pioneers and Indians. One electronically sealed chamber later, we enter the visiting room – and wait”. Read it all here.. Saul Landau is an Institute for Policy Studies fellow whose films are on DVD from roundworldproductions@gmail.com

LISA JENSEN LINKS.
In honor of Shakespeare Santa Cruz’s upcoming live production of The Three Musketeers (opening this weekend), visit Lisa Jensen Online Express (http://ljo-express.blogspot.com/) for a look at Dueling Musketeer Movies, and why some buckle their swash with more style than others. Also, further thoughts on the Passion of Harry Potter, evoked by the surprisingly emotional and fulfilling Deathly Hallows Part 2.

HISTORIC CHURCH PHOTO. Carey Casey amends last week’s photo comments, “According to John Chase, in ‘The Sidewalk Companion to Santa Cruz Architecture’, this wooden church was built in 1857, next to the original 1794 mission church, after the adobe structure was partially destroyed by earthquakes. The remainder of the adobe was given a new wooden front and roof (presumably that’s it, to the right of the church in the photo). That structure was torn down in 1885 to make room for the present church building. The 1857 building stood where the rectory is today, and was torn down in 1898″. Thanks Carey, I needed that.

UNIVERSAL GRAPEVINE. Each and every Tuesday from 7:00-8:00 p.m. I host Universal Grapevine on KZSC 88.1 fm. or on your computer (live only, or sometimes old programs are archived…(see next paragraph) and go to WWW.KZSC.ORG. Michael Warren will give us an in depth Shakespeare Santa Cruz preview on July 19 and Sue Heinz will return to tell us even more about Tarot, The Qabalah, and of course astrology on that same program. July 26 has Sean Van Sommeran talking about our shark neighbors, suitably followed by Laura Kasa or Colleen Badnarz or somebody from Save Our Shores. New executive director of MAH Nina Simon will guest on August 2, telling us all about the new ideas happening at the Museum of Art & History. After Nina, Grey Hayes will talk about environmental issues and ideas for our bay area. Author. Then on August 9th writer John Deck will talk about his book ” Joan Linville.. Seven Steps to an Acting Career”.Any and all suggestions for future programs are more than welcome so tune in and keep listening

QUOTES. “If a pick pocket meets a Holy Man, he will see only his pockets“, Hari Dass Baba. “There is no place to go, and so we travel! You and I, and what for, just to imagine that we could go somewhere else”, Edward Dahlberg. “Man is a blind, witless, low-brow, anthropomorphic clod who inflicts lesions upon the earth”, Ian McHarg. 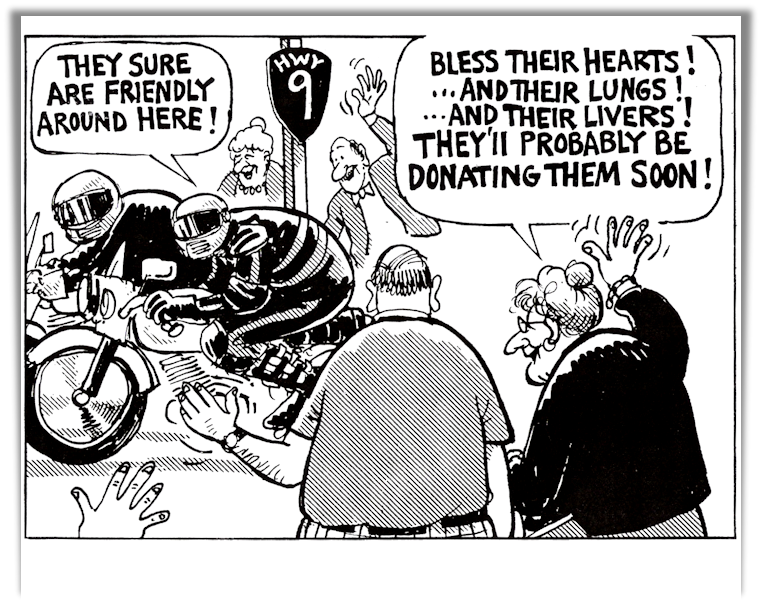