LA BAHIA & HERITAGE. How quick are we going to be to allow our Canfield owned City Council to discard our landmarks for the promise of money?? More than that local Supervisor Mark Stone (also a member of the California Coastal Commission) is being hit with an email blast from the local Babbitt Lobby about how great Swenson’s vision for the La Bahia site is and how it’s just what Santa Cruz needs. The business groups, the Sentinel, and the R.Coonerty gang are putting on a full court press to pressure Commissioner Stone to “see the light.” Since the new La Bahia doesn’t have any meeting room that’ll hold more than 125, all future conference attendees (if any) will have to use Canfield’s Cocoanut Grove. Is that swank or what? Canfield Swenson wants the Coastal Commission to approve changes to our local coastal plan that would allow Swenson to bulldoze these old buildings.
We ought to remind Commissioner Stone that the Swenson project is unacceptable under our current local coastal program, and the changes the city is asking the Coastal Commission to approve are unacceptable under the Coastal Act. Since it is Mr. Stone’s responsibility as a Coastal Commissioner to enforce the standards of the Coastal Act, he ought to deny the city’s application. Hang in there, Mark. Tell Mark we need his care and concern for our coast now more than ever.

BE HONEST. Given that the room rates will be about the same at the proposed “Canfield Swenson La Bahia” as they are at the Dream Inn-Coast Hotel, where would YOU rather stay ??? Be honest!!! Where would advise your visiting guests to stay?? If you were staying in Santa Cruz where would you rather stroll… along West Cliff toward the Lighthouse or along Beach Street, The Arcade, and Beach Flats??? Think about that!!!

HISTORICAL NEWSPAPER BOYS AGING FAST. Steve Premo wrote to tell me, “I’m 57 years old, and was only two when that picture was taken. If the guys in the picture were delivering papers in 1956, they were, what, 12? That would make them 65-70 years old now”. Steve. Then shortly after that Dean Quarnstrom emailed, “In this great Santa Cruz photo, I see very cool Elvis-influenced hair styles on a few carriers, and then, the background vehicles include, left to right, the tail-end of a ’55 Chevy station wagon, a ’54 Chevy station wagon, and two ’53 Chevy Panel Trucks. Chevy replaced all two-piece windshields with a solid, one-piece of glass windshield in 1954, and then upgraded all models again to a wrap-around windshield in 1955. Thanks, Dean Quarnstrom. Hopefully I’ll never forget.

PATTON’S PROGRAM. Gary says re spending more $$ on the De-Sal plant plan, “The City of Santa Cruz and the Soquel Creek Water District are planning to develop a desalination plant. The environmental impacts, and the costs, are both likely to be great. If you would like to express your own opinion, you will have an opportunity to do that tomorrow, at a meeting of the Santa Cruz City Council. Item #10 on the Council’s “Consent Agenda” is a proposal to amend the current contract that the City has with its desalination consultants, increasing the contract amount by $580,000, bringing the grand total of expenses under the contract to almost $1.5 million dollars. This does not include the cost of environmental review, which is additional. I’ve placed links to both the staff report and the actual contract amendment in the transcript of today’s Report. Critics believe that there are less costly and less environmentally damaging ways to address water supply issues. Since the City will soon be doing a complete new Urban Water Management Plan, critics say that the City should suspend further spending on desal, until after that longer range plan has been prepared, and has been subjected to public review, and then has been adopted by the Council. Read the rest of his weekly report dealing with Mobile Home rent control, AMBAG, and Habitat Conservation here.
(Gary Patton
is “Of Counsel” to the Santa Cruz law firm of Wittwer & Parkin, which specializes in land use and environmental law. The opinions expressed are Mr. Patton’s. Gary has his own website, “Two Worlds / 365” – www.gapatton.net )

LANDAU’S PROGRES. Saul writes “No thought For Food” in the latest Progreso Weekly, he starts off with, “In up market restaurants one wouldn’t know the world is suffering from a food crisis. As I observed young executives and professionals slurping oysters and chasing them with martinis at a downtown San Francisco watering house last month without glancing at the prices of such items, less affluent mortals around the world had to overreach their budgets to buy bread, tortillas and oil to cook their food. But those who routinely pay $25.95 for seared ahi tuna hardly blink when the menu lists the same dish for $28.95 — certainly not after three martinis” Read the rest here. Saul Landau is an Institute for Policy Studies fellow whose films are on DVD from roundworldproductions@gmail.com

Have a LinkedIn Page? Joining LinkedIn Groups is the best way to network on LinkedIn.
LinkedIn is a fantastic way to boost your visibility as a professional — it’s the top social network site for business. Building a basic profile on LinkedIn is free, so is joining groups. So take full advantage! The only limit? You can join up to 50 groups! First, you set up your profile at www.linkedin.com. From there, you have access to the Groups feature (or visit the Help menu and type in Groups.) To find groups you want to join, visit LinkedIn’s Group Directory and also look at your friends’ and colleagues’ profiles to see which groups they have joined.

The following are 5 tips from Joan Stewart, aka The Publicity Hound. She has a great newsletter that you can subscribe to for free, here: http://www.PublicityHound.com.

CHRISTINA WATERS WEIGHS IN. this week Christina peeks into the new Staff of Life, chows down at O’mei and weighs in on The Fighter. All @ http://christinawaters.com

LISA JENSEN LINKS. She says, “reflect on the Oscar Fever that continues this week at Lisa Jensen Online Express (http://ljo-express.blogspot.com/) where you can join me in a virtual tour of award-winning movie costumes from the L. A. Fashion Institute, visit my private archive of Oscar Nominee Barbies, and find out who I’m betting on in my annual Oscar predictions. Fearless or clueless? You make the call!
Lisa Jensen has been writing film reviews and a column for Good Times since 1975.

BARNEY’S VERSION. Paul Giamatti plays his usual stuff in this tragi-comedy but he does it better than ever. Who you’ll really notice is his true love Rosamund Pike. There are 694 pictures of her on Rotten Tomatoes; I think I viewed them all, maybe twice!! She’s from London and is 32 years old and should become stupendously famous. Check out these 694 photos here… And the rest of the film will make you squirm, make you sad, make you hate Giamatti’s character, but you’ll feel like something didn’t work in the plot, and I don’t know what it was either. John C. Reilly uses every acting gimmick he has and it still doesn’t work.

CEDAR RAPIDS. New humor, not even the simple minded gross humor of Adam Sandler, Jennifer Anniston, Vince Vaughan type, this is some near kinky, odd, nerdy, Midwest type humor. I didn’t laugh once.

I AM NUMBER FOUR. Those darned space invaders now they’re chasing after American high schoolers, or actually 30 year old Hollywood actors who claim to be high schoolers. It’s almost good enough to be called camp humor. Don’t even rent it.

LUIS VALDEZ’S “MUMMIFIED DEER” AT UCSC. Kinan Valdez, Luis Valdez’s son told us on Universal Grapevine that Mummified Deer is one of dad’s favorite plays. It’s a theatrical biography of the Valdez family. It’s being presented by UCSC’s Theatre Arts Department and runs Friday February 25 through Sunday March 6 at The Mainstage Theatre. Remember it starts at 7 p.m. thurs-sat. and 3 pm for Sunday matinees. Kinan’s directing it, and says the student actors are fantastic. The UC Santa Cruz Theater Arts Department announces that acclaimed playwright, director, and filmmaker Luis Valdez will join his son Kinan Valdez for two special post-performance talks at the UC Santa Cruz Theater Arts Center. The senior Valdez — the author of the play “Mummified Deer” which opens on Friday, February 25 at UCSC — will make a special appearance after two performances: on Saturday, February 26 and again the following week on Friday, March 4. The playwright and the director will speak about the genesis of the play and take questions from the audience. Special ticket offer: Buy one full-price ticket ($15), get a second ticket FREE at the Sunday Feb. 27 matinee or the Thursday, Mar. 3 evening performances.Tickets for “Mummified Deer” are available now at santacruztickets.com and at the UCSC Ticket Office and the Santa Cruz Civic Auditorium box office. (Performance dates and times below.)

UNIVERSAL GRAPEVINE. Each and every Tuesday from 7:00-8:00 p.m. I host Universal Grapevine on KZSC 88.1 fm. or on your computer (live only, or sometimes old programs are on “blog”) at WWW.KZSC.ORG. On February 22, Santa Cruz County Superior Court Judge Paul Burdick will be talking about what a Superior Court judge does. After Paul, UCSC Prof., author, editor John Brown Childs will give us reactions to his book “Hurricane Katrina”.On March 1st Rob Slawinski will reveal secrets about the auction business. Gary Bascou 1/2 of Staff of Life follows Rob and will talk about their brand spanking new store. March 8th is one of the great 88’s (KZSC) Pledge Drive and County Supervisor John Leopold & I will play lots of Arhoolie Recordings and exhort you into supporting our number one most listened to college radio station in the USA. Peggy Dolgenos and Westi Haughey from Cruzio will talk about their new location and their new lighting of “the fiber internet”, on March 15. The Museum of Art & History’s pottery show is the topic on March 22 with Paula Kenyon and Karen Massaro. Carolyn Burke will share views on her brand new book on Edith Piaf and her early death also on the 22nd. Then on March 29 Sara Wilbourne administrator of the Santa Cruz Ballet Theatre will discuss their latest plans and projects. Any and all suggestions for future programs are more than welcome so tune in and keep listening.

QUOTES. “I am malicious because I am miserable; if any being felt emotions of benevolence towards me, I should return them, an hundred and an hundred fold”, Frankenstein Monster in Mary Shelley’s Frankenstein. “I never found a companion that was as companionable as solitude”, Henry David Thoreau. “Live fast, die young, and have a good looking corpse”, John Derek in “Knock on Any Door” 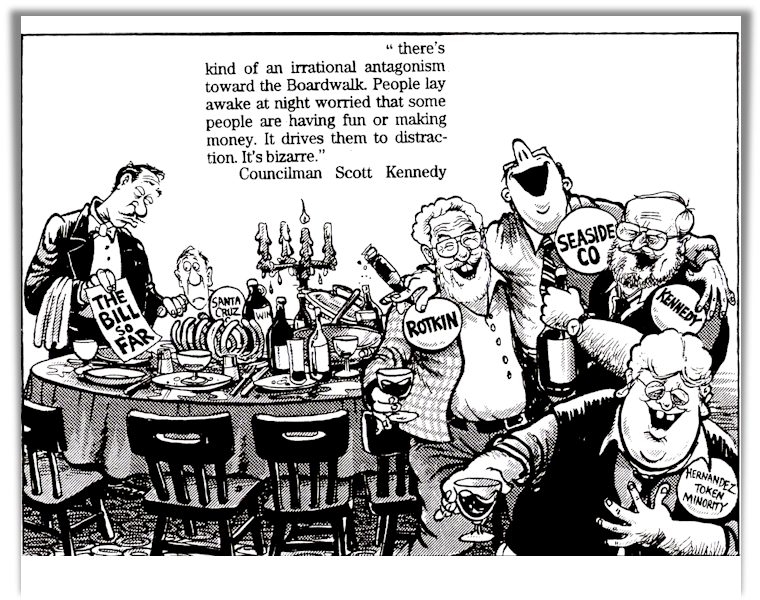 Posted in Weekly Articles | Comments Off on February 22 – 28