THE BROADWAY HYATT UNITY HOTEL.You know that with this City Council the proposed 111 room Hyatt Place Hotel at Broadway and Ocean is a slam dunk. Look at the design on page 4 here.

Does anyone care at all about this piece of stucco junk? Can anyone point out even one inch of beauty, interest, or design of this building? This council is not only hell bent on tearing down the La Bahia hotel’s integrity but they’ll allow another of these cookie

cutter boxes to further ruin any uniqueness Santa Cruz once had as a city. I’ve said this a few times before (like for the Rittenhouse mausoleum) that a plaque with each councilpersons name affixed should be prominently displayed on this Hyatt Horror so that our children and all visitors will know who to blame for allowing such feeble and boring structures to ruin our very tenuous reputation for a city with integrity. For shame.

PATTON’S PROGRAM. Gary relates a lot of information on our City Water supply and the importance of our Water Commission and the role of our Community water Coalition. He tells of LAFCO meeting Wednesday at 9:30am in the County building and why we should care. There’s the Capitola General Plan Update happening. He closes with some words from President Nixon on land use, which seems startling. Read it all here. (Gary Patton is “Of Counsel” to the Santa Cruz law firm of Wittwer & Parkin, which specializes in land use and environmental law. The opinions expressed are Mr. Patton’s. Gary has his own website, “Two Worlds / 365” – www.gapatton.net )

LANDAU’S PROGRES. Some news about Saul Landau’s new film “Will The Real Terrorist Please Stand Up”. In April 1961, the CIA sent a force of Cuban exiles to overthrow the Cuban government. This resulted in the Bay of Pigs fiasco. Fifty years later, a new documentary shows that US-backed violence against Cuba continued for decades. The new film, with Danny Glover, anti-Cuba terrorists, and Fidel Castro himself (filmed recently) is combined with fascinating archival footage and a rare recorded interview from prison with one of the Cuban 5. These men are serving long sentences in US prisons for trying to stop terrorism against tourist sites in their country.

Saul Landau has produced over forty films. He has received numerous awards, including an Emmy with Jack Willis for “Paul Jacobs and the Nuclear Gang”, the Letelier-Moffitt Human Rights Award, the George Polk Award for Investigative Reporting, the First Amendment Award, and an award from the Chilean government for his human rights work. He is a senior fellow at the Institute for Policy Studies.(Saul Landau is an Institute for Policy Studies fellow whose films are on DVD from roundworldproductions@gmail.com )

SANDY LYDON’S CENTRAL COAST SECRETS. Be sure to click, and check out everything Sandy has going on at “C.C. Secrets“. He’s got news of a benefit at the Rio on April 23rd to help the folks in Japan. He’s got more news of a rail walk starting this Friday night (4/8) at 7. An Abalone Fest (4/16), and a very special tour of China and Tibet in October which has only a few seats left. Read it all here

LISA JENSEN LINKS. It’s Team Tannery vs. Team Cabrillo in the first episode of Junk Art Scramble, a new locally-produced reality show. Join me at Lisa Jensen Online Express (http://ljo-express.blogspot.com/) for a ringside seat as the cameras roll. Also, the story so far on James Durbin’s excellent American Idol adventure, the return of the mighty Kong, and a chance to get your glam on at the upcoming gala kickoff event for this year’s 10th Anniversary edition of the Santa Cruz Film Festival. (Lisa Jensen has been writing film reviews and a column for Good Times since 1975).

KEFAUVER’S SOCIAL MEDIA TIPS. NEW! Facebook Offers Easy Fix for Common Mistake with Facebook Business Pages.
Finally Facebook is providing a way for personal pages to be changed to business pages. There are a lot of organizations that set up Facebook pages as “profiles” and have been reluctant to make the transition to a business page. Now it can be done and you can automatically bring your “friends” over to the new page.
As a user of Facebook and a professional social media consultant, I dislike it when on my personal Facebook page, (which I reserve for friends, family and some business colleagues), I receive a notification that I have a new contact asking to “Friend me,” but then it turns out that request is coming from a business, not an individual. When a business asks to “Friend” me, I can’t tell who is running the page. I don’t want to add a business, even one I like, to my personal Facebook page which is devoted to my friends and family.
It’s a common mistake: business owners and well-intentioned employees often erroneously set up business pages on personal Facebook profile accounts. One simple way to distinguish between these two types of accounts on Facebook: when you connect with a new Friend it will say “Add a Friend.” When connecting with a page from a Business you receive a request to “Like” the page.
Facebook Crackdown
Facebook policy declares it has the right to shut down your Facebook page if you are using a Facebook personal profile account as a business account. They state: “Maintaining a profile for anything other than an individual person is a violation of Facebook’ s Statement of Rights and Responsibilities. If you don’t convert your profile to a Page, you risk permanently losing access to the profile and all of your content.”
Here’s the FIX
Why should you convert your profile to a Page? Since profiles are for meant individual people, they aren’t suited to meet your business needs. Pages offer more robust features for organizations, businesses, brands, and public figures. Visit the Facebook Help Center and review options for “Converting your profile into a Page.” Here’s the link: http://www.facebook.com/help/?page=18918. Thanks to Jim Coffis, Publisher of San Lorenzo Valley News Network, SLVNews.Net, for pointing out this Facebook update to me.
(Karen Kefauver is a freelance journalist who writes about sports and travel, including a monthly Sentinel column, Spin City, about bicycling. As a social media consultant she meets with business owners to develop social media strategies and teaches them the best ways to use Facebook, LinkedIn, Twitter and other social networks for business promotion. Contact Karen at: karen@karenkefauver and visit her website: http://www.karenkefauver.com. Her Facebook Page also offers free social media tips: http://www.facebook.com/karen.kefauver.business.
Blog: Adventure Travel Journal Blog: Karen’s Social Media Tips
Website: www.karenkefauver.com Contact Me Facebook Twitter

CRACKS. A terrible title, one I never figured out. This British girl’s 1934 boarding school drama will remind you of many other period films, except the acting is so good it surpasses them all. Remember “Picnic at Hanging Rock”?? It’s almost that good. Go see it.

CERTIFIED COPY. Abbas Kiarostami who directed Taste of Cherry did this one too. Juliette Binoche got the Cannes best actress award for her role in Certified Copy. I thought the entire film was a phony intellectual exercise that amounted to nothing of any substance. It seemed to matter to somebody (like critics and the film extras) whether this couple was married or not, I just couldn’t get involved.

SOURCE CODE. Jake Gyllenhaal does a Groundhogs Day time warp type plot in this science fiction/other reality thriller about a train blowing up in Chicago. Very complex and most of my friends either have seen it twice or feel like it’s necessary to do so. It’s good fun, you’ll keep thinking all the way through it, never boring, maybe a tiny, tiny plot hole here and there, but I’ve only seen it once so far. Go for it.

THE MUSIC NEVER STOPPED. Bing Crosby, Grateful Dead, Bob Dylan plus lots more music helps this kid with a brain tumor re-relate to the world. It’s sad, meaningful, sensitive, and well acted. Wait and rent it, but don’t forget it.

WIN WIN. What a fantastic rapid rise in fame Paul Giamatti has had. He’s great in every role we’ve seen him in. This 44 year old actor plays a tough dad in this one. There’s high school wrestling, and lots of family type drama. It doesn’t go too deep into anything but it’s still a good movie….rent it.

DON’T FORGET. Jane Eyre and Of Gods and Men.These films need and deserve big screens. And you deserve seeing them at their best. You’ll remember both of them long after they’ve left.

HOSTETTER’S HOT STUFF. (Bratton edit note…As per always, Paul works hard to get out this amazing list of events…plus graphics to match. And as usual I get the list about one week behind, so be very aware of the performance dates…’cause you probably missed a few of his hot hits). “Grueling little period coming up. Tough decisions lie ahead. Now that the weather seems to be lightening up, everyone also seems to be double and triple booking, so pay close attention to dates here: http://www.lutherie.net/live.music.html, as they’re not quite in chronological order. But starting this Thursday

night, there’s the John Jorgenson Quintet in Felton, then two nights of real Cajun music: on Friday, BeauSoleil in SF and then the Magnolia Sisters on Saturday at the Freight. But meanwhile, Darol Anger and Scott Law are in Nevada City also on Friday the 1st, in the first of four gigs in the Bay Area. On top of that, the Endangered Baroque Music concert in Santa Cruz is also on Saturday the 2nd. And that’s not all. Then there’s a breather until Tuesday and Wednesday when Salif Keita sings at Yoshi’s in SF. Then there’s lots more the following weekend, and it’s still largely all here: http://www.lutherie.net/live.music.html, and this will be added to (and you will be reminded again about that) in due time. Da best, ph.

UNIVERSAL GRAPEVINE. Each and every Tuesday from 7:00-8:00 p.m. I host Universal Grapevine on KZSC 88.1 fm. or on your computer (live only, or sometimes old programs are on “blog”) at WWW.KZSC.ORG. Dan Haifley of O’Neill’s Sea Odyssey will discuss nautical and harbor changes on April 5th followed by the New Director of the Santa Cruz City Museum Daniel Harder. Paul Johnston of Organizing for Santa Cruz will tell us about their many accomplishments on April 12, then journalist/photographer Peter McGettigan will discuss his views from behind the camera and reveal his new projects. On April 19th Mike Pappas owner of the new True Olive Connection Tasting Room on Lincoln Street will tell us all about olive oils and vinegars. After Mike, Sandy Lydon returns to explain all his new trips, classes and tours.

Any and all suggestions for future programs are more than welcome so tune in and keep listening.

QUOTES. “A pessimist is a man who, when he smells flowers, looks around for the coffin”, H.L. Mencken. “I am free of all prejudice, I hate everyone equally“, W.C. Fields. “:Those who give up smoking aren’t the heroes. The real heroes are the rest of us—who have to listen to them”, Hal Boyle. 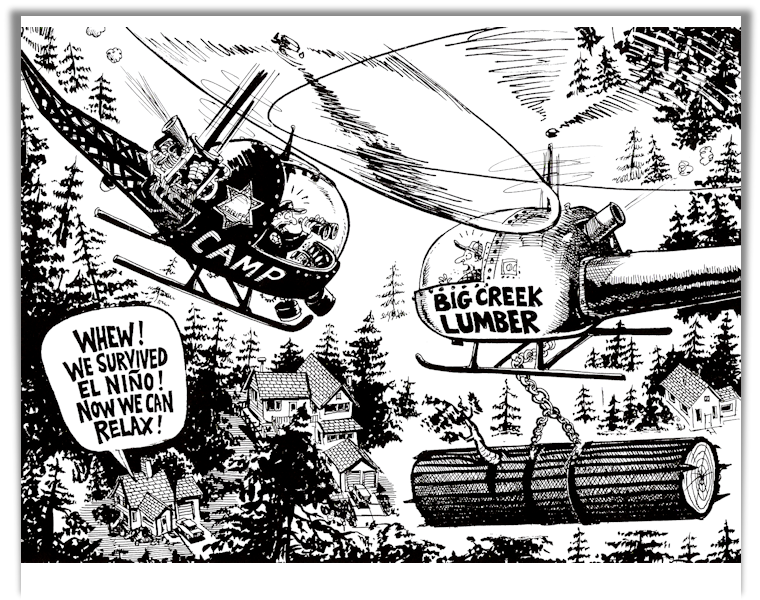