DEATH AND DYING AGAIN. Details are still coming in and I’m waiting for more follow-through on other funeral plans but one good friend told me about MedCure. http://medcure.org . Medcure’s head office is in Portland, Oregon. She heard about MedCure through our local Hospice. It’s donating the body to research idea. They come and pick up the body, cremate it, send you the remains and it’s 100% free. It worked for her husband’s death, and everyone was happy with the results. They have a 24/7 toll free phone line at 866-560-2525. There’s Shary Farr’s Partners For Transitions which has an unbeatable reputation, check them out.

VOTE ON DE SAL. If you’re not up on all the latest facts, statistics, ideas, and plans from the “let the citizens vote on a de-sal plant” group (RTVOD)go to their new website at…

TAX DAY GATHERING. Questions about income- and other taxes will be the theme of a Tax Day Gathering on Tuesday, April 17, from four to six PM, on the Water Street steps of the Santa Cruz County Courthouse.

There will be a brief talk by Tereza Corraggio, local author and teacher of Economics,
songs by the Santa Cruz WILPF Raging Grannies, and many signs, flags and banners.
Everyone is invited to come and express their thoughts about taxes.

I was incorrect last week, assuming such a huge impact project would be years in

coming. It appears that ” fast track” now is a more appropriate term. A company called Property Development Centers (PDC) now has the job of public relations for the project. They will be hiring a PR person to ” gather input from the community” and other interested people. PDC expects to have this completed and plans to be submitted to the county in 6 weeks. Stay tuned.

No on Rumble Strips on Highway 1

For an education on how the public feels about this action, link to the Regional Transportation’s website and read their correspondence log. There are many letters from bicycle riders who don’t want to see Caltrans carve these “rumble strips” along the sides of Highway 1 north of Santa Cruz. These are people who took the time to write individual letters, with very honest and sensible reasons to oppose these strips being considered by Caltrans, supposedly to wake up sleepy or drunk drivers headed off the road. What is Caltrans thinking? They must not be.

Write your own letter to the RTC, email seems to be the best way to reach them. Let’s stop this crazy rumble-stripping of our Highway 1 that brings so much pleasure to bicyclists from all over, and so many visitors to Santa Cruz County.

CHUCK MOORE SERVICES APRIL 28. Friends of the late and great Chuck Moore (of Moore’s Graphic Arts) need to know that services will be held at noon on Saturday April 28th. Email Elizabeth at jimmigal@cruzio.com if you’ve forgotten how to get to their house, and bring food to share.

PATTON’S PROGRAM. Gary talks about Measure J and how our Board Of Supes might be changing that low income housing requirement. There’s some words about the county and the styrofoam ban. Cal Am Water is rearing up in Monterey and Gary talks about the death of his friend Peter Douglas who served so dutifully on the Coastal Commission and helped protect our North Coast. He closes be reminding us of Earth Day this Saturday, April 14.

“This week passed so quickly that I have nothing to say about it. Each day required paying attention to so many details, making little adjustments and tweaks to the routine, that I had no chance to lift my nose off my navel to see what else might have happened around me. From a quick survey of the folks on station, it appears other people feel the same way.

The crew has changed with the season, and we’re all getting used to one another at the same time that Antarctica goes through some of its most dramatic environmental shifts. But it all happens so slowly… every day a smidgeon shorter, the wind a bit brisker, and all the lives of the winter crew a tad more intertwined. These changes come with a few frost-nipped cheeks and misunderstandings, naturally. Not arguments, not avalanches– nothing noteworthy. We’re settling in for the winter, and have to let out a few whines or creaks just like an old house getting comfortable.

Times like these remind me of the importance of self-care– go easy on yourself, so you don’t end up giving other people a hard time. For me, that means cooking a pot of my own special-recipe lentil soup with roasted garlic, taking a bowl up to my room to curl up in my bunk with a book. I switched back to fiction, and set my alarm fifteen minutes later
for tomorrow morning. I’ve done my part. The rest of the details will get sorted out next week, I’m sure”.

SANDY LYDON’S SECRETS. At this moment Sandy and Annie Lydon are in Scotland researching a piece of her family’s history. They’re also preparing for their return in September and connecting the real Loch Lomond with our local version…Sandy has many tours coming up and only a few open spots… check out his website to get in on his brand of fun and history. http://www.sandylydon.com

LANDAU’S PROGRES. Saul Landau talks about Fidel secrets including attempts to assassinate him. He says, ” For 53 years U.S. officials and Miami exiles have tried to assassinate Fidel Castro 638 times, overthrow his revolutionary government, and blamed him for numerous sins. The exiles and government officials who upbraid him have yet to thank Fidel for providing them with long-term employment. Given their levels of incompetence in carrying out bloody but unsuccessful terrorist acts, writing of inane and inaccurate reports and uttering of supercilious predictions about Cuba’s reality and its future, they appear unfit for other work – well, maybe as TSA screeners. One Fidel beneficiary, retired CIA analyst Brian Latell (“Castro’s Secrets: The CIA And Cuba’s Intelligence Machine,” Palgrave Macmillan) condemns Castro for simply failing to inform the U.S. government about Lee Harvey Oswald’s intentions to kill Kennedy”. Read the entire article here…

BELA TARR AND THE MAN FROM LONDON. Since The Artists and Hugo folks have been more aware of the power of Silent movies. Bela Tarr has only made a few films he’s now 57. He’s Hungarian, uses only black and white film and says he’s never going to make any more films. I believe The Turin Horse is his last. I just saw The Man from London (2007) and Tilda Swinton has a small part in it. It’s stylized as they say but moving, deep, mysterious and completely absorbing. Tarr’s Werckmeister Harmonies was even more so. If you like Shakespeare’s tragedies and Wagner’s serious operas check out Bela Tarr’s films.

JIRO DREAMS OF SUSHI. This absolutely stunning documentary of Jiro Ono, an 85 year old Japanese owner of the world’s most perfect Sushi restaurant is a tribute to one human’s lifetime pursuit of perfection. Starting life as an abandoned child, his little 10 seat Sushi restaurant charges $300 per meal, there’s a one year wait for seating and Michelin awards it 3 stars each year the only Sushi Restaurant in the world to attain such a level. He’s like Picasso in his art, James Beard in his cooking, and like nobody else in his devotion. You’ll love this film, go for it.

LISA JENSEN LINKS. “Spring has barely sprung, but our summer arts season is already shaping up. Take a sneak peek at the swashbuckling new Shakespeare Santa Cruz season this week at Lisa Jensen Online Express Lisa Jensen has been writing film reviews and columns for Good Times since 1975.

HOSTETTER’S HOT STUFF. A brief reminder of some things coming up in this general vicinity, such as (very soon) the Honeydrops, Hermeto Pascoal, Bombino (I think), Genticorum, The Santa Cruz Baroque Festival’s 4th concert of the season, the SF Scottish Fiddlist’s big blowout (not Valley of the Moon, that’s different), Shujaat Khan, David Francey, Pierre Bensusan, Pasatempo (not to be confused with Pasatiempo, the golf course), and way down the line: Darol Anger and the Republic Of The Strings. Somehow the culture signals for the month of June seemed jammed at the moment, but something will turn up, and when it does, it’ll also be found here. And so there it is. ph

CONTEMPORARY MUSIC CONCERTS AT UCSC. Every Friday night in April for more than 35 years the UCSC Music Department features free contemporary music concerts. The first two have been great, exciting, even illuminating. This Friday night April 13, half of the concert will be devoted to graduate student works performed by the LA-based Gnarwhallaby Quartet; the second half will feature a retrospective of the work of visiting composer David Mahler (Pittsburgh, Pennsylvania), including a piece for seven cymbals and a new trio for piano, guitar, and accordion. After that several other guests will be featured, including composer Chris Brown (April 20) from Mills College. Brown’s piece Gangsa (April 20) involves four amplified gongs and computer manipulation and promises to be quite a spectacle. Other festival highlights include performances of works by music faculty Ben Carson, David Cope, David Evan Jones, Hi Kyung Kim, Paul Nauert, and Zachary Watkins. Performers include Cathie Apple, Giacomo Fiore, Julie Hanify, Mary Jane Cope, Amy Beal, Krys Bobrowski, John Sackett, Camille Chitwood, Max Shrieve-Don, and many others. Remember free and open to the public. They are all at the Music Recital Hall, doors open at 7 concerts start at 7:30.

An extraordinary evening of chamber and choral music by Korean-San Franciscan Hyo-shin Na, including a world premiere of her new work Fellini Dreaming

UNIVERSAL GRAPEVINE. Each and every Tuesday from 7:00-8:00 p.m. I host Universal Grapevine on KZSC 88.1 fm. or on your computer (live only, or sometimes old programs are archived…(see next paragraph) and go to WWW.KZSC.ORG. Mary Thyken, exec.dir. Of the Santa Cruz Community TV will be the opening guest on April 10th then Felicia Rice from UCSC’s Digital Arts Department will clue us in on the new exhibit ” I’ve got something on your mind”. Karuna Cayton author of The Misleading Mind will open the program on April 17th and Elizabeth Limbach, editor of Good Times will talk about future issues. Joan Boothe Author of ” The Storied Ice” about Antarctica’s Explorers will be on April 24th and so will Christian Schwartz talking about Mushrooms and their bay area hunters. Do remember, any and all suggestions for future programs are more than welcome so tune in, and keep listening. Email me always at bratton@cruzio.com

QUOTES. “Always get married in the morning. That way, if it doesn’t work out, you haven’t wasted a whole day“, Mickey Rooney. ” I said to my husband, “You must develop some mechanical skills, like getting out of bed”, Phyllis Diller. “The most difficult year of marriage is the one you’re in”, Franklin Pierce Jones. 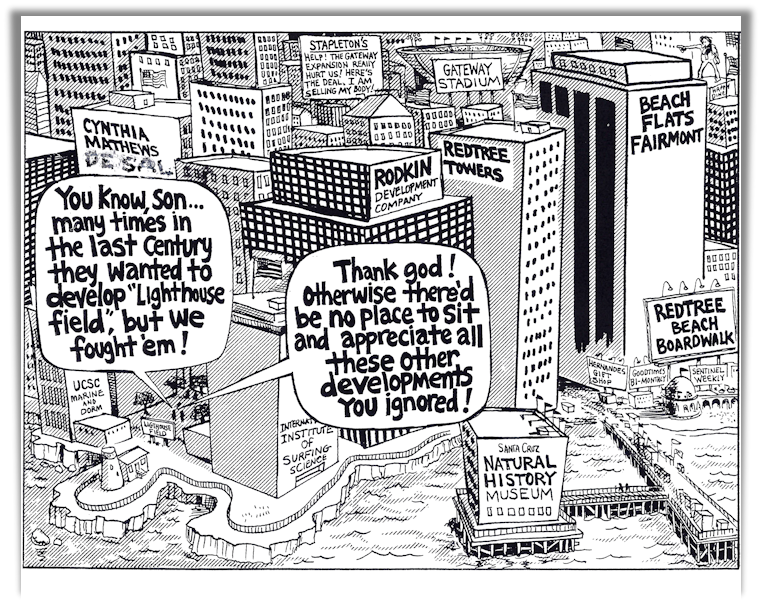 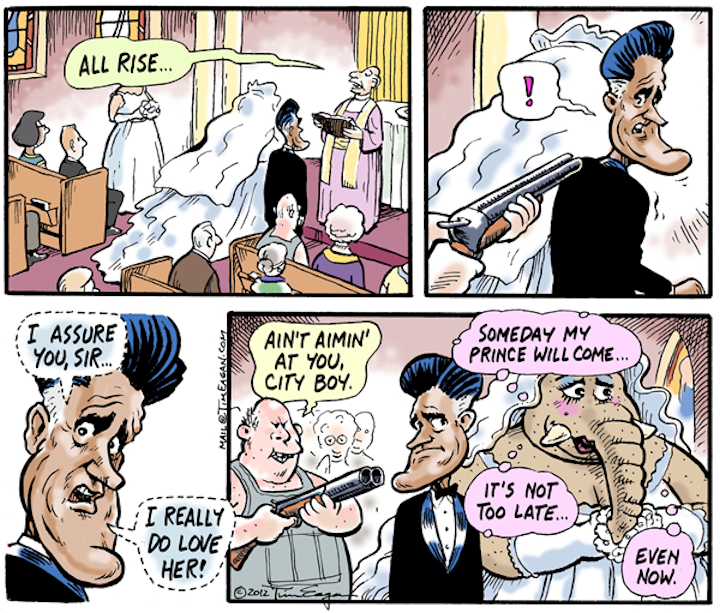